Like a stunning firework display making a crowd “ooh and aarh” his original aesthetic is breathtaking in-person. He consistently reminds us his process is not digital. 2020 sees a fresh elegance and simplicity. A self taught, pop art star, winner of the Best Rising Artist Prize at Spectrum Miami!

HIS ART IS HAND-CRAFTED.

Life got really tough personally, so he found it hard to do anything other than what brought him some joy.

Tyler pays a lot of attention to aesthetics and originality.

demonstrated in both the composition and creative process of his pieces.

Tyler has been described as an extension of Warhol "It's really cool to receive such praise, but I think labels can hold you back- put you in a box. My whole life's been about embracing uncertainty, so I think it's only fair to approach my art the same way."

Tyler Sean is a 28 year old, self-taught contemporary artist out of South Florida. His work employs an ingenious process he invented- one that is a true reflection of the artist and the way his mind works. Tyler loves using recognizable figures, taking advantage of their archetypical qualities through irony and nuance.

Tyler's creative journey happened rather organically. Life got really tough personally, so he found it hard to do anything other than what brought him some joy.

"Just the act of making- it was one of the only things that gave me a respite from really agonizing anxiety."

As his focus grew, so too did his creative process. Tyler's body of work has grown significantly in a short period of time. His distinct style allows him to stick out from the others. Some have pointed to Tyler's work as the evolution of Warhol. However, Tyler prefers to be left out of such comparisons,

"I have a lot larger aspirations as an artist."

"The original composition of this piece is a discussion of money and art, and the conflicting nature of their relationship. The artist gets put in a precarious situation, where it's either play by the rules or get out. Skeezy salesmen often dictate the value of your work, and the artist becomes caught in the middle- between gaining recognition and a platform to spread ideas, and losing ones creative integrity" TYLER SEAN

"My technical and creative process' seemingly go hand in hand. My technique is a product of the way I think, being able to pay attention to minute detail whilst maintaining the broader aesthetic of what I'm trying to achieve. My passion and expression can be found just as much in the process as in the finished piece." - TYLER SEAN 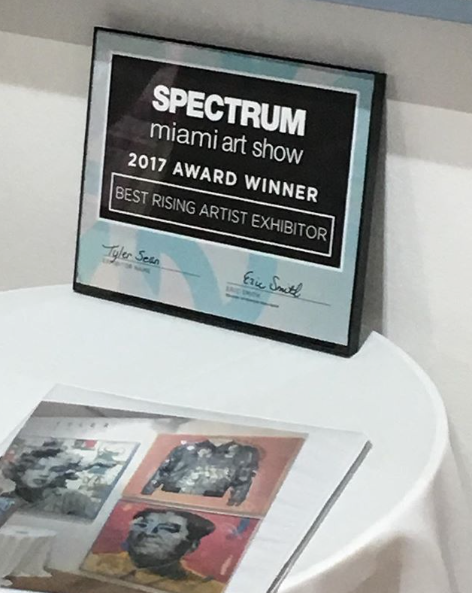